Geraci must go (or Salvini will go?): implications of the Italian signature in the Belt & Road Initiative with China

It was astonishing to watch on TV the signing of the BRI agreement between China and Italy in Palermo, last month. Main global newspapers painted such agreement as a game changer, as it surely is: an important G7 country, founder of then European Union, probably the main US ally in Europe after UK, decides on its own to cut the Atlantic ties with Washington after 75 years, preferring the emerging power, Beijing, is pretty unusual, if not incredible.

Moreover, it is scary: if one important US ally such as Italy, which hosts more than 110 US military compounds in its territory – including nuclear weapons – thinks that it is worth to change its strategic stance, it means that the incumbent is in big trouble, with huge instability ahead. At least, this was the message that was indirectly reverberated by Rome all around the world with the signature of the BRI agreement.

All this has been happening in the middle of a huge power struggle between Mr. Xi and Mr. Trump in regard to strategic commercial issues; basically Washington complains about its own trade deficit caused by excessive import, while Beijing boasts economic strength thanks to such unstoppable American attitude to buy foreign – and especially Chinese – merchandise. Clearly Washington position has been deeply weakened due to Italian deal with China. 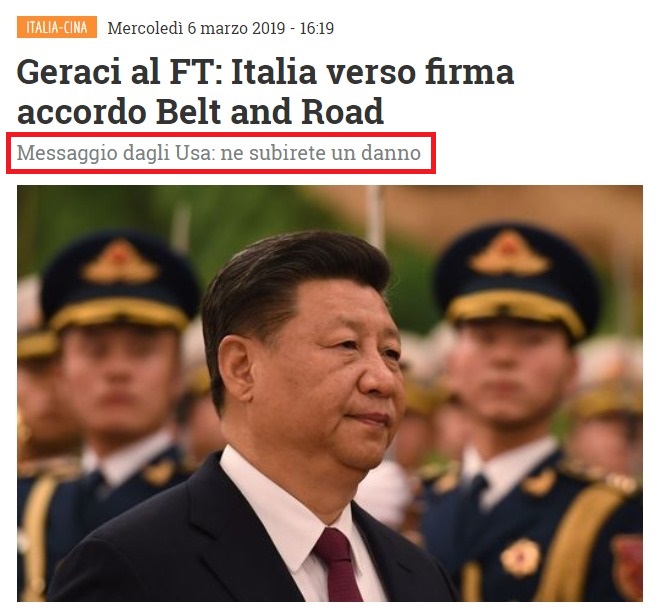 USA swift answer to Italy: “You will be damaged by such deal”

In fact, apart for the strategic implications, on the Rome side it is not clear what kind of material gains are to be expected from such Chines shift; I mean for Italy as a country, not for the politicians/political parties involved in the deal.

Now, after a month and an half of diplomatic turbulence and disbelief, the dust is settling and the US is starting again – as usual – to preserve its own interests. In this regard, it is emerging a peculiar trend, very similar to what has been experienced 25 years ago with Tangentopoli: judges are jailing politicians on a grand scheme, aimed at clamping down on corruption. It is curious that mainly center-right politicians are incarcerated, especially the Lega’s ones. And it is even more peculiar the timing, just weeks after the BRI betrayal.

Even more incredible is that Italy has been, since at least 2018, in the verge of an economic collapse, being Washington the only credible “strategic-friend”, strong enough to support its national challenge to Brussels to soften the EU austerity stance. Then same austerity that has already defaulted the Greek society, with more than 40% of its population now living below the poverty threshold.

We should ask ourself if what has been happening today in Italy is fortuitous? Is it coincidental? Maybe is the result of structural miscalculation? Or its roots must be referred to personal and/or political interest of a specific political party/group of stakeholders?

On an external point of view, the only explanation we can offer is that, possibly, Rome has not fully understood the implications of such “Chinese” shift: in fact Italy is just a small piece of a grand puzzle that is being re-assembled today. Therefore, looking forward, the Rome shift towards China might just look as a form of collateral damage in few years time (at least for the USA), I mean for the really big players. The main problem lies on the consequences that will be borne by the Italian people, who surely have not understood at all the social damages that such unexpected move might imply. 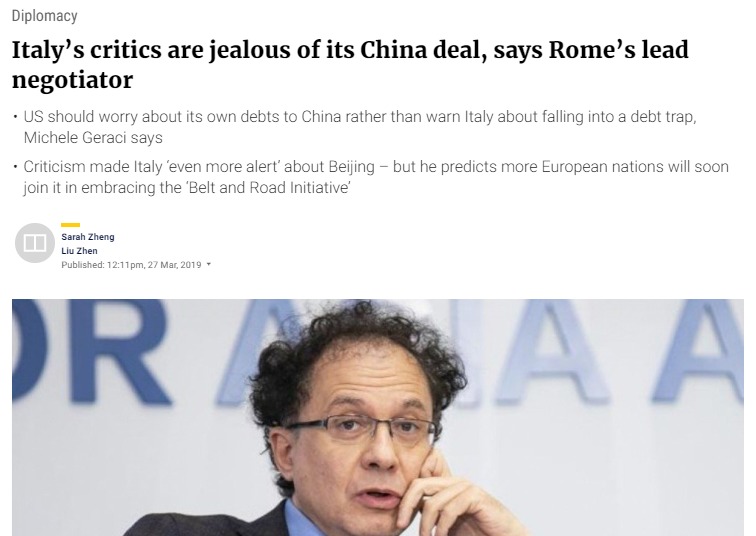 Therefore, for Italy it should be worth reconsidering – on the main Italian interest – such “Chinese” shift, in order to comply with the Atlantic and NATO interests. Bearing in mind that US interests have always been coincidental with the Italian ones, for almost 80 years (…). The main risk is that Italy might be strategically sacrificed, due to superior drivers. What does it means for Italy it is not clear yet, but it will be in few months time.

For this reason we suggest that Geraci, the person that was responsible for the Chinese BRI deal, should go. Immediately. And together with him, maybe also few other major MPs/politicians on the Lega side (Mr. Centinaio? Mr. Centemero? Even Mr Giorgetti?). In fact the risk is, if they don’t go, Salvini will go. And Italy – as we know it today – with him.

All odds are against Italy today.