No Result
View All Result

Worldwide inflation (made in USA) vs. politically driven lockdown (in EU/DDR) and organized power blackouts (in China) to fight rising prices. What's next?

by mittdolcino
in Geopolitica, USA

To ask oneself which model is the right one, if the traditional capitalistic one, clearly based – at least in principle – on meritocracy and on Adam Smith’s school, rather than the China-DDR model, having the EU the semblance of a DDR evolved towards an entrepreneurial appearance, means to ask oneself the wrong question (on pain of compressions of citizens’ fundamental freedoms, as we have seen with COVID in the EU, ed). In fact, the real question is which of the two systems really does the widespread interest of its own people. Instead of favoring the usual elitist potentates, that Nazism would have wanted us to love. 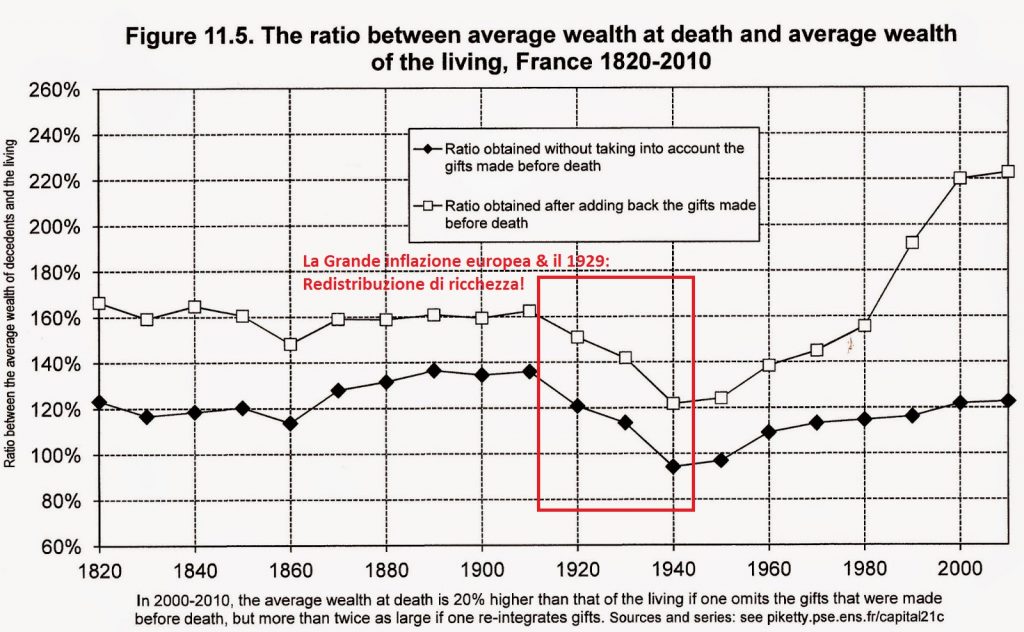 It is factual that, in the case, getting to hypothesize to impose lockdowns (in EU) or to organize energy blackouts (in China) with the sole purpose of not starting the hated inflation at home, which would blow up their own economic model centered on historical/elitist/state powers, means in the end hating their own people (I’m talking about 99.9% of the population, by the way). In favor of a laughable 0.1% blessed by a rigged system.

The fact remains that the top riches/elites in France and especially in Germany are old, ancient, I would say traditional or handed down. Even those who command the economic levers in Germany today are more or less the same as in the Wilhelmine era, their families.

We can say, however, contrary to southern Europe, that in Germany exists a kind of social pact; even if it is already misguided in the hypothesis, given the absurdity of having formally conceived – in the presence of such social pact – an “Aktion T4 Plan”, many decades ago, against the most unfortunate part of their lineage (Hegel docet … perhaps revived and corrected today with mRNA vaccines?). This Germanic social pact provides, in a nutshell, that, yes, huge concentration of wealth are allowed as long as they live reasonably well their fellow citizens of blood.

It seems that in the EU this concept has evolved as it would have done in the EU conquered by the Nazis: favoring the Germans to the detriment of other EU populations.

And here comes for free the explanation of the insane castle of EU rules designed to plunder the periphery to the advantage of the center of the Empire, remaining Paris as the chariot of the armed ideology favorite daughter of the anti-Christian Hegel.

Clearly, today, after seeing the lockdowns applied in the EU without any need, just to reduce the demand for goods, i.e. to fight inflation (cfr. at the cost of killing the middle class and the economy in general) we have understood that, if on the one hand the wheel is rigged, this is always to the advantage of the same.

If we then add what the EU newspapers do not tell you, China is doing something similar, that planning energy blackouts to reduce the demand for raw materials or the rise of prices out of control is to COMBAT INFLATION, you understand that the “schools”, both in Beijing and Berlin / Brussels, are the same.

All this with an aggravating circumstance, for those who read: China, that is making programmed energy blackouts, does so to cut off the head of inflation at home, limiting the demand for increasingly expensive primary goods locally (raw materials above all), i.e. to save its own economic system [the inflation that led to the Tiananmen Square Crisis decapitated the cusp of the Chinese Communist Party of the times, ed.]. It’s a pity that this attitude, useful only at home, makes then explode the inflation abroad, first of all Europe (due to the lack of export goods in the countries accustomed to buy from China the necessary productive factors for their industry).

Knowing that the USA and the Anglo-Saxon world, apart from being naturally rich in resources (USA, Australia, Canada etc.), revolve around the American dollar, which has been acting as a shock absorber for 80 years. And bearng in mind that there is a manufacturing onshoring underway that began with Trump, to the US, from China.

So, the containers blocked in U.S. ports annihilate Chinese exports to the States, with China unable to export and collect dollars, which are missing in the system, a very useful tool for pressure. In short, an asymmetric war. Exactly.

All to the advantage of the USA of course, which today sees the dollar as an inflationary defense, on the rise (as Tom Luongo advocated).

At the end, made simple, it is clearly America to benefit from the rise of worlwide inflation, being itself interested in that the inflation persists. On the other hand, especially the pro-€ people fear like the plague the rise of prices, which would make the single currency to implode (we are expecting shorty some very well known tricks from EU government to hide inflation, e.g. a southern EU version of the “inflacion dibujada”, or sketched inflation, that – means more or less – “inflation rigged by the government”, as seen in Argentina during its latest economic implosion).

Similarly, the inflationary losers remain those of the EU-Germany-China axis, noting that the latter is already revaluing the yuan, in its own defense. The EU, on the other hand, does not knows how to get out of it, in order to revalue, since the Euro Union has been engineered to devalue the single currency, contrary to what the German mark would have done (…).

Given that, in the present context, the worst off countries in the EU are precisely the Euro-weak, even more so if they are productive and rich in savings to attack.

You understand what I am getting at. 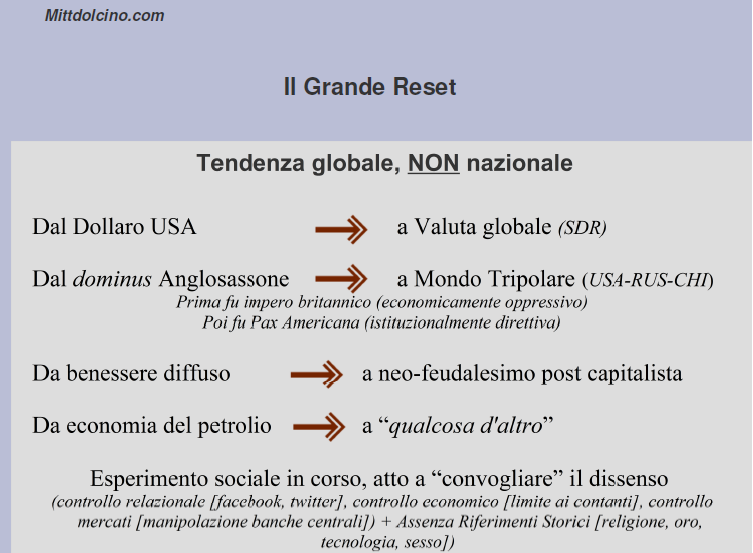 What to expect now?

Normally similar situations anticipate a hot war. Japan’s attack on Pearl Harbour came after years of  boycotts of all kinds against Tokyo’s economic interests. I do not think it will be an exception this time either (the great Reset we explained HERE, in 2019, with slidies, in italian).

Similarly, it should be remembered that the USA remains very fearsome in war, having specialized their strategies to such an extent as to be able to win even in the battle of the Midway despite being outnumbered by any military parameter of the times. Pragmatism prevailing in short.

Let’s forget further digressions, e.g. to explain how today’s attack to the dominus USA actually starts from abroad. Which has co-opted, not differently from what it did 80 years ago to prevent the USA from entering the war against the Nazis, the American elites in a pro-ideal-Nazi function (see George W. Bush’s grandfather, Prescott Bush, head of the Thyssen bank in New York, and his activism to favor the rising III. Reich, so much as to provide General Motors engines to the first vehicles that made the German invasions of WWII, or the forerunners of computers to manage the large organization that was behind the Holocaust, thanks to IBM, ed).

In this context, apart from the epilogue, it seems obvious that from now on it will be the EU to try the card of the end of NATO in Europe, risking a new cold war between the two sides of the Atlantic. And the US to defend the dollar block, the cornerstone of its power.

In every case, we should be be aware that the most likely solution to the current geostrategic conundrum will be an agreement between the three major world powers, two commercial powers (USA+China) and one resources based (Russia) to eliminate the “inconvenient 4th“, the EU, with Berlin as a beacon. And with France sistematically ready to sow discord for its own benefit,

All in all, the truth is that we are living in a global mess, based on the assumption that Berlin pretends not to take in consideration that it has lost not only two world wars, but even twenty geostrategic trains or so in the last 100 years.

No Result
View All Result